In the past, thermal paper was frequently the subject of debate in view of the problematic substances on which it relies to produce a printed image. Now HERMA offers an adhesive material for thermal printer labels that is fully approved for food contact and thought to be the first of its kind worldwide. HERMAtherm nature (grade 900) is guaranteed to be completely free from chemical developers – the substances generally used to create an imprint. 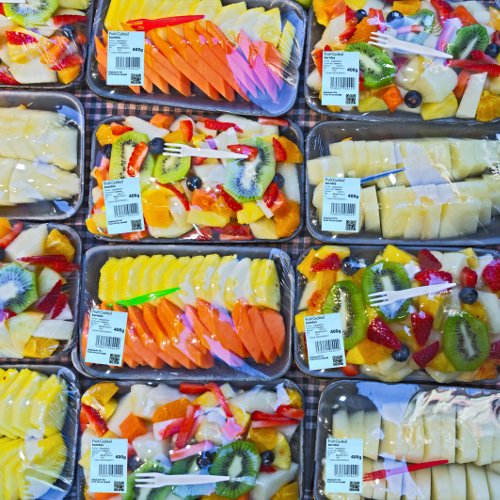 Labels made from this material are simple to use in all conventional thermal printers. A further benefit lies in the multi-layer adhesive 62Dps used by HERMA, which is especially migration-safe and likewise approved for direct contact with dry, moist and fatty foodstuffs. Thanks to the multi-layer technology, even with its low-migration properties 62Dps is characterised by exceptional adhesive performance, including in cool environments. The new label stock HERMAtherm nature (900) was originated in partnership with Koehler Paper.

“Based on our experience in coating and die-cutting operations, HERMAtherm nature (900) is just as easy to process as conventional thermal label stock,” insists HERMA’s head of development Dr. Nicole Metzler. In addition, although it is a coloured material, which inevitably reduces contrast, no barcode reading errors were recorded during a large-scale trial. Labels produced from the material completed the trial without prompting any faults whatsoever.

The characteristic blue-grey thermal paper Blue4est® Pro created in-house by Koehler Paper has already been used for environment-friendly retail till receipts for some time. With Blue4est® Pro the imprint is not produced by a chemical reaction in response to the application of heat. Instead, an entirely physical reaction takes place in which an opaque active coating on the paper becomes transparent under the influence of heat.

This reaction reveals the black coating underneath. Compared to commonplace, conventional thermal papers, not only is Blue4est® Pro especially kind to the environment, but the imprint it produces also resists environmental influences, such as sunlight and moisture, especially well. According to Koehler Paper, the printed image remains legible for more than 35 years.

HERMA Self-Adhesive materials is changing its own shipping labels