Whether wrap-around packs, trays, pads, paper or film, imagination knows no bounds when packaging beverage cans on the new Innopack Kisters Wrap-aroundShrinkPaperPacker Advanced or WSPP A from KHS. With its great flexibility the new packer satisfies practically every secondary packaging requirement of both customers and the market in general. Moreover, existing Innopack Kisters machines in the Advanced series can be upgraded to a WSPP A. 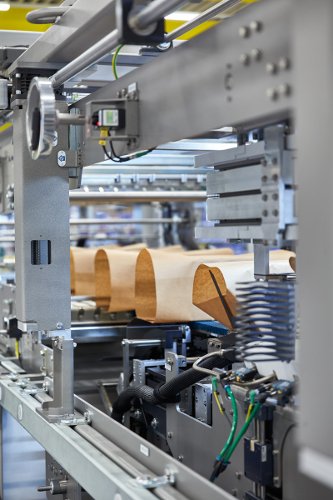 For the first time at the beginning of 2020 KHS presented a machine that wraps beverage cans in paper. The first tentative steps in this direction were taken 20 years ago. Those working on the new version thought that this form of secondary packaging was so retro that it could perhaps become a trend. Their assumption was correct! “Paper as a packaging material is still a novelty on the beverage market,” states Ernst van Wickeren, packaging product manager for KHS. “However, this alternative is already definitely meeting with great interest from beverage canners. Many of our customers who sell organic beverages, for instance, also want to convey the notion of ecology through the packaging – and in doing so are satisfying a rapidly growing consumer demand.”

Interestingly enough, many of the potential users of the new pack are not intending on making a full switch. Most of them see the paper wrapping as an additional new option with which to package their diverse range of products. “Right from the start we had lots of requests for machines that can process both paper and film,” van Wickeren explains. “These were often from fillers who market premium products alongside less expensive beverage varieties. The high-quality products are to be wrapped in paper while the packs in the lower price segment are to be held together with shrink film.”

The logical conclusion was that KHS very quickly further developed an existing machine so as to give the beverage industry full flexibility in secondary packaging. By adding a new function, a packer has been produced whose options are as extensive as its name is long: the Innopack Kisters Wrap-aroundShrinkPaperPacker Advanced – or WSPP A for short. With its combination of process modules the line-compatible machine can process three different types of secondary packaging: Wrap-around cartons, where the pack is enclosed in cardboard, Trays with or without a paper or shrink film wrapping, Cardboard pads wrapped in paper or shrink film. The machine packages cylindrical containers – especially beverage cans – whose compact shape and even surface make them suitable for wrapping in paper.

On the technical front, the new paper wrapping function needed adjustments to be made to the former film wrapping module in particular and a new module for paper folding and gluing to be devised. The unwinding and cutting unit previously used for the shrink film was thus given a connecting unit for paper and film. This section of the machine is also where hot melt is applied from below and the paper is pulled taut. These functions are deactivated when shrink film is processed.

In the new folding module folding tools tightly fold and erect the paper around the sides of the packs with absolute precision. The separate KHS InnoHotMelt applicator with its needle valves ensures flawless glue application. An optional automatic glue pellet feed system is also available for uninterrupted production. In the setting unit of this module the glued side flaps are pressed onto the pack and fixed by foam-coated application belts.

The shrink tunnel can be individually configured and scores on low energy consumption. A gas heating system can be used here as a further option that reduces energy costs by up to 50% and cuts CO2 emissions by up to 60%. If paper is used in place of film, the machine conveys the finished packs through the shrink tunnel that has been switched off. If paper wrapping is to replace film packaging entirely, the shrink tunnel can be completely removed, then making the machine no longer in its dimensions than a previous packer design.

Looking at the annual electricity savings shows just how energy efficient paper packs are compared to film packs. With a shrink tunnel consumption of up to 72 kWh in two-shift operation on 300 days of the year, a maximum of €30,000 can be saved per annum. Retrofitting an Innopack Kisters WSP is not difficult; all that needs to be done is to replace the existing wrapping module with the further developed wrapping module with its new functions and to install the paper folding and gluing module. “Once the modules are installed, besides the standard format changeovers no other conversions are needed when switching from paper to film,” van Wickeren emphasizes. “All that has to be changed is the packaging material and the hot melt applicators need to be activated in good time so that they’re ready for use when production starts.”

Cooperation between Bergmann Brauerei and KHS: united in brewing tradition

KHS and Eckes-Granini launch bottles made of 100% rPET