The global beer market remains creative. Vital input comes from the craft beer movement, which has expanded from the USA to the rest of the world to become an essential element in the overall beer scene. Consumers are also opening up more and more to non-alcoholic beers, low-alcohol beers and beer mixes, all of which is an outgrowth of the trend toward healthy consumption.

According to market research institute Plato Logic, the global beer market grew by 1.4 percent last year, compared to just 0.4 percent in 2017. Plato Logic believes this comparatively much more positive result can be attributed to growth in the Chinese beer market – the world’s largest – for the first time since 2013. It ranks China, the USA, Brazil, Germany, Mexico, Russia, Japan, the UK, Vietnam and Spain as the ten largest beer markets. According to the study, the six largest beer nations, taken together, account for more than 55 percent of global beer consumption, with collective growth in 2018 of 0.8 percent.

Global per capita consumption of beer and non-alcoholic beer reached 26.1 litres in 2018, according to Plato Logic. Broken down by region, the USA remains the leader at 59.4 litres/person, followed by Europe (56.1 litres), the Asia/Pacific (17.3 litres) and Africa/Middle East (9.6 litres). Even within Europe, there was little change in the leading positions. The Czech Republic has traditionally been well out in front. Last year, Czechs consumed an average of 153.7 litres of beer and non-alcoholic beers, with second-placed Austria well behind at 110.9 litres/person. The other top positions were held by Germany (108.0 litres), Poland (100.7 litres), Romania (95.5 litres) and Croatia (89.6 litres). 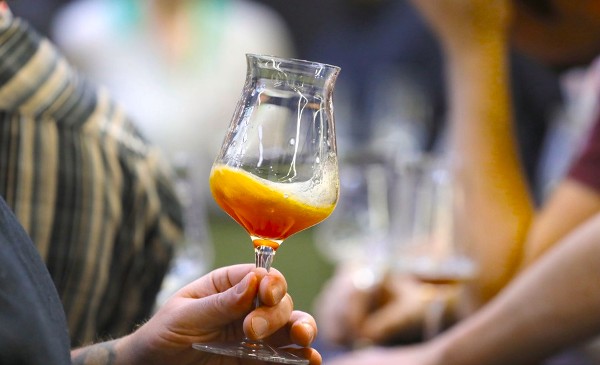 According to the Barth Report, released in mid-2019, the world’s largest brewery group is AB InBev, with a beer output of 567 million hectolitres (hl) in 2018, representing 29.8 percent of world beer production. Next in order were Heineken (233.8 million hl), China Res. Snow Breweries (121.0 million hl), Carlsberg (112.3 million hl) and Molson Coors (96.6 million hl). The top five brewery companies thus account for 59.5 percent of global beer production. The top ten, with the addition of Tsingtao Brewery Group, Asahi, BGI/Groupe Castel, Yanjing and Efes, represent 72.5 percent of global production, according to the report.

Compared to the numbers mentioned above, the figures for craft beer do not look particularly exciting at first glance. Globally, according to Plato Logic, craft beer output came to 74.1 million hl last year, or just 3.8 percent of global beer consumption. Even so, craft beers are what add variety to the beer market. Johnny Forsyth, Associate Director Mintel Food & Drink, comments: “Craft is the ‘new premium’ in beer, and consumers are happy to pay more for smaller-batch, hand-crafted options. For these consumers, craft beer taps into their desire for new experiences with a nod to the past for inspiration, offering new beer styles that they have never drunk before.”

According to Bob Pease, President and CEO of the Brewers Association, a question increasingly asked is whether craft beer consumption is drifting toward a turning point in the USA, the very country where the craft beer movement originated. Pease comments: “There is no sign that the trend is weakening. Although increasing competition makes it harder, the market niche is still large enough for small and independent breweries with a regional focus to come onto the market and develop further.” So far, the figures back Pease’s position. Whereas the total beer volume in the USA declined by one percent in 2018, the Brewers Association notes that craft breweries grew by 4.0 percent to achieve a market share by volume of 13.2 percent, with output of 25.9 million barrels (30.4 million hl). Expressed in dollars, that represents an increase of 7.0 percent, which is higher again than the growth in sales. The market share of the US craft breweries, measured in terms of revenue, came to 24.1 percent last year. In total, there were 7,346 craft breweries in the country in 2018. One interesting aspect is the strong growth in canned craft beers in the USA, at 40.7 percent in 2018, compared to 31.5 percent in 2017.

The level of devotion to craft beer is not restricted to the USA but is a worldwide phenomenon. Every year, craft beer volumes increase on every continent, although the USA and Europe are still the drivers. The results of a Mintel study on new craft beer products in 2018 suggest that Europe is now more innovative in this area than the USA. According to this study, 54.0 percent of all new craft beers in 2017 came from Europe, compared to only 19.0 percent from North America.

Another trend in the global brewery sector is the shift toward non-alcoholic and light beers. For 2018, Plato Logic reports global consumption of 43.96 million hl in this segment. This is up from 40 million hl in 2016. Europe leads the field with 27.22 million hl, followed by Africa/Middle East (7.62 million hl), the USA (4.6 million hl) and the Asia/Pacific (4.52 million hl). According to The Brewers of Europe, the international Reputation Institute performed a survey of more than 10,000 adult Europeans in twelve countries in 2018. This showed that moderate alcohol consumption was a factor in the lifestyle or drinking culture of almost half of those surveyed, and that they appreciated innovative, reduced-alcohol and non-alcoholic brewery products.

As reported by the Federal Statistics Office, breweries and beer warehouses in Germany sold about 94 million hl of beer in total in 2018. This figure does not include non-alcoholic beers or non-alcoholic malt drinks, or beers imported from countries outside the EU. Beer sales grew by 0.5 million hl compared to the previous year. But compared to overall movements in the previous 25 years, the trend is clearly downward. In 1993, for example, German beer sales were still as high as 112.1 million hl, falling to 100 million hl by 2009, and levelling off at around 95 million hl in the past five years.

BrauBeviale is one of the most important capital goods trade fairs for the beverage industry worldwide. During this three-day event at Exhibition Centre Nuremberg, international exhibitors showcase a comprehensive range of solutions for the entire beverage production process chain, including raw materials, technologies, logistics and marketing ideas. Visitors come from the technical and commercial management segments of the European beverage industry as well as from the retail and catering sectors. The product display is rounded out by an attractive supporting programme that explores and discusses the trending issues in the industry.

The main topic is the future viability of the beverage sector. Other highlights include the BrauBeviale Forum, Craft Drinks Area and numerous themed pavilions. The usual relaxed atmosphere will make BrauBeviale the No. 1 meeting place for the industry. Private Brauereien Bayern (Bavarian Association of Private Breweries) is the honorary sponsor of BrauBeviale. BrauBeviale is a member of the Beviale Family, the global network of events focusing on the manufacture and marketing of beverages.

BrauBeviale 2022 suspended at the request of the industry